I've been a big fan of Trisha Ashley for a good few years and having followed her on twitter @trishaashley (do follow!) I asked her if she could send me a little post on christmas, her books and the amazing recipes she ties in to the story and I'm rather excited by the fact she said Yes! So here it is....... 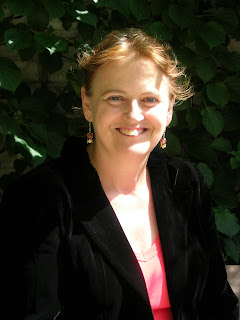 Believe it or not, I didn’t actually set out to write novels full of food, cookery and recipes, those elements just sneaked in, reflecting my own keen interest in the subject!
I started to put the recipes at the back of my novels in response to all the email
requests I had for them, and you will also find one or two on my Facebook fanpage,
where it lists my main hobby as Battenberg Cake….
Mmm….
Well, as I said, those elements crept in - and never more so than in my Christmas
novels. At the back of my latest one, The Magic of Christmas, you will find the
recipes for mincemeat flapjacks and also for mincemeat spudge, which is what I call
mashed potato fudge.
The Magic of Christmas is a major reworking of an earlier novel, Sweet
Nothings. I always felt there was a lot more I’d wanted to put in that book, so I had
great fun revisiting the village of Middlemoss and all its characters again.
As well as food, friendship is always an important theme in my books, and it is the
support of her friends in the Christmas Pudding Circle that keeps Lizzie going as she
struggles on towards the end of difficult marriage. There is another village tradition,
too, the annual Boxing Day Mystery Play, and both the preparations for that and the
meetings of the Christmas Pudding Circle start months ahead, leading to an ever-
faster toboggan ride towards Christmas.
Of course, there’s lots more going on, too – Lizzie is a keen cook and has quite a
bit of rivalry going on with her husbands’ cousin Nick, who is a chef and cookery
writer. Then there’s the mystery of what Caz the gamekeeper up at the hall does with
all the grey squirrels…
My next novel, Chocolate Shoes and Wedding Blues, will be out next May
and I will be trying out the recipes for that one over Christmas. All this research –
especially the chocolate making for Chocolate Wishes! – hasn’t done a lot for my
figure….
My tip for coping with the Christmas catering is to have only things you like,
not everything the magazines tell you you must have to make it ‘perfect’ (perfectly
indigestible?). Forge your own traditions. There is no law that says you have to have
chipolata sausages with your turkey, mix chestnuts with your sprouts, or have stuffing
and bread sauce. Do your own thing. I like custard on my Christmas pudding, not
brandy butter and white sauce and if you are eating at my house, that’s what you will
get. The simpler you keep things, the less stressed out you will be and the more you
will enjoy the day itself.
You can prepare and freeze all kinds of things well in advance, too, including
mince pies, which will only take about three-quarters of an hour to defrost at room
temperature. Or make my Christmas mincemeat flapjacks, which are so easy and
delicious, you’ll never want to buy another one!
Happy Christmas, everyone – with lots of good reading!

Visit my website at https://www.penguin.co.uk/authors/trisha-ashley/1078235/ to email me, write in my guestbook
or join my newsletter group. I also have a Facebook fanpage, am on Twitter as
@trishaashley and have also recently appeared on Youtube, talking about writing. 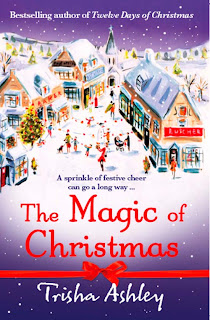 The Magic Of Christmas

"In the West Lancashire village of Middlemoss, Lizzie Pharamond is cooking up a defensive storm of comfort food as she becomes increasingly estranged from her serially unfaithful husband, Tom.
Then fate takes a hand and when Tom is killed in a car accident, Lizzie has to deal with his quarrelling mistresses and devious friends – and to top it all – The Mystery Play steering committee have to find a new Lazarus. Middlemoss is already gearing up for its annual performance due to take place on Boxing Day with Tom’s elderly uncle Roly Pharamond as the Voice of God.

As a distraction, Lizzie’s Christmas Pudding Club is about to have the first meeting of the year to swap baking tips for traditional puddings, cakes and mince pies. Lizzie's growing rivalry with her husband’s cousin, celebrated cookery writer Nick Pharamond, is coming to boiling point. Having snatched the Best Mince Pie prize away from her at the village show, he is certainly the last man she wants to play Adam to her Eve in the Mystery Play.

Meanwhile, her best friend Annie has developed an unsuitable crush on local resident Ritch Rainford, the handsome and charismatic star a popular TV soap. But it becomes clear that Ritch is more interested in Lizzie who, desperately in need of comfort, might just be a tiny bit tempted.

The Voice of God will have one or two things to say about these and other village affairs at the Mystery Play, in a performance that will be a hard act to follow next year." 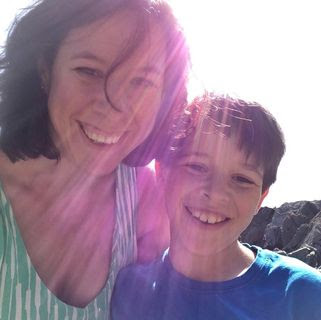 Hello, thanks for dropping in! I’m Lucinda, a mum who adores the outdoor life but also the baking within. With my husband we run our somewhat chaotic life in Sussex with two gorgeous but mischievous boys, our mad springer spaniel & golden retriever, two fire siding loving cats & very different but full of character chickens!